2go Travel Promo: This post is a list of travel advisories from 2Go Travel that have affected a number of voyages due to the tropical depression, Urduja and the recent tropical storm, Vinta that hit the country especially in the Visayas and Mindanao areas days before Christmas. Having these said incidents opted the shipping company, 2Go Travel to reschedule their voyages to some select destinations especially those affected point of destinations. 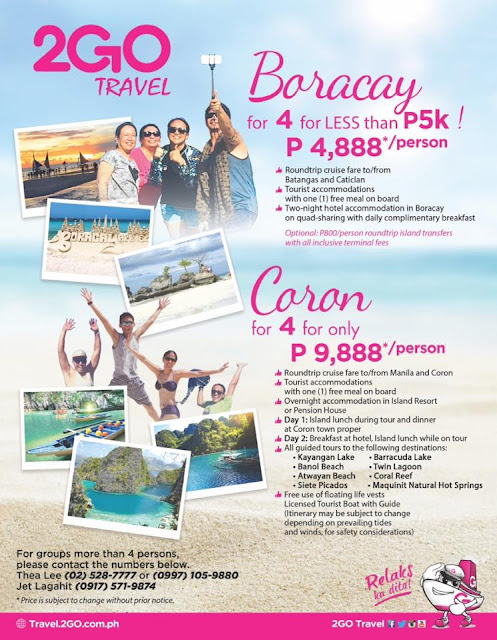 2go Travel Promo Fare: To all our seafarers and fellow sea passengers. Here's one thing we could take advantage of 2go's promo offering! Tickets are on sale for a limited time and slots and place! We suggest that if you are near the event's place, you can visit the trade fare right away to avail of the tickets. 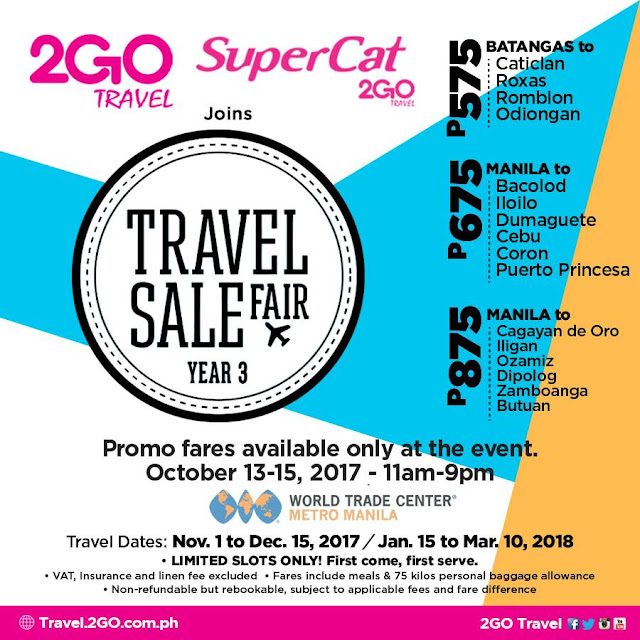 You can only purchase or avail this 2go travel promo tickets at the venue.

M/V St Therese of Child Jesus is back to sail!

2Go Travel Promo: Just so you know, the vessel, St Therese of Child Jesus that sails to Iloilo, Bacolod and Cagayn de Oro has been put to maintenance check up for about a month. And the good news is, everything is good to go and is now ready to sail back to its designated routes. More information about the vessel. It's a passenger-type sea transport. Gross Tonnage:  16485, Deadweight:  3652 t, Length Overall x Breadth Extreme:  160m × 25m and it was built on Year, 1989. It's docking port is in Manila. The ship's capacity is 1,856 passengers and a 200 twenty-foot equivalent units (TEU) of cargo. 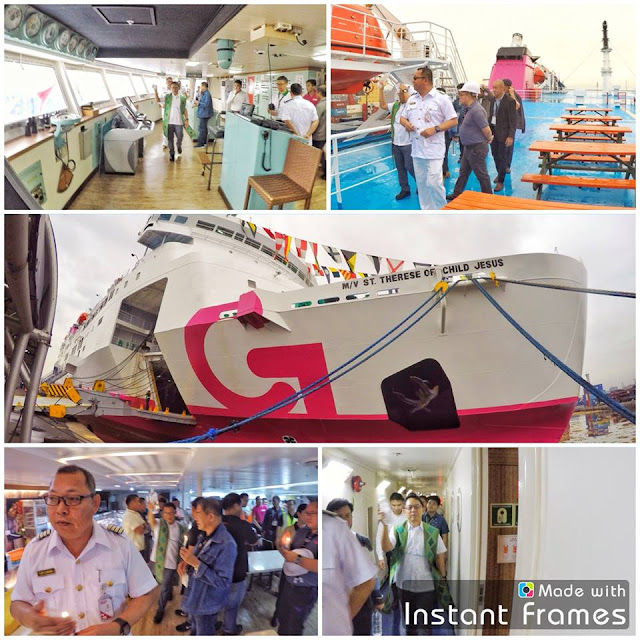 2Go Travel Promo: Back to School Promo is cool. Avail of our promo latest promo. BOOK and BUY now. HURRY! Rates as low as P875, P675 and P575. For travels date from June 16-September 30, 2017. Limited slots only. First come, first served. This promo is available thru ONLINE purchase only here. It is NOT  available in any ticketing outlets or travel agencies. Make sure to take note of that so you won't waste your time going to the malls or any outlets to buy the tickets on promo. 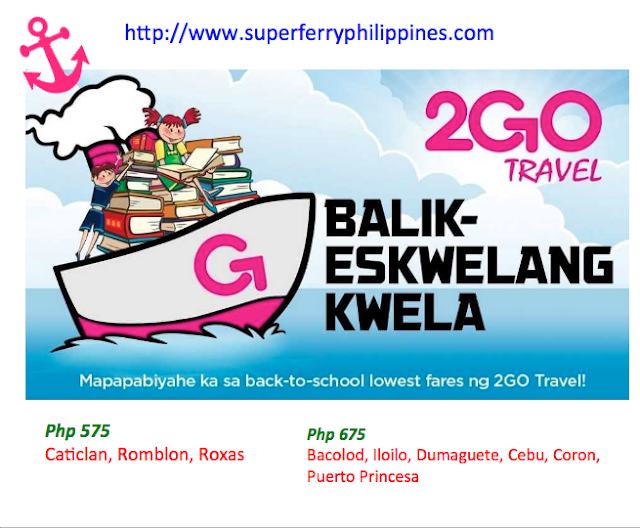 More promo information below including the designated routes.

Promos PH: To all our fellow 2Go Travel passengers and readers about Superferry promo fares, we have some announcement to make about our newest website that we just launched this month of May. Earlier, we thought of catering to a greater no. of Filipinos that are looking for promos on different brands and online shopping sites. Since this blog we maintained since 2008 has been doing good, serving our subscribers with the latest promo updates exclusively for 2Go travel, we would like to touch-base to the other needs of our fellow readers, thus we created a new website.

Please take a time to visit www.promos.ph which aims to really provide you with information on the latest deals, promos, discount vouchers from the various shopping sites in our country like Ebay, Zalora, Lazada, Booking.com, Agoda and a lot more.

We hope you were able to check the new website we have. And we wish you could take a little favor we ask from you. We have created a dedicated social media accounts exclusive for this new promos.ph. Pls. refer below for the different accounts. And just to let you know, you will have a chance to buy a teeth whitening kit and avail it with 20% off from its price! How is that? Please continue reading.

2go Travel Promo 2017: The company 2Go Travel or formerly Superferry has released a one-day promo during Mother's day but you don't need to worry as the said promo is still can applicable to this very day! The 2go Travel promo will have a travel period from June 16 to September 30, 2017. There are various routes in which 2Go Travel is sailing. From port to port ferries. Below are the cheapest fares you can book through 2go Travel with their corresponding route destination:

2go Travel Promo 2017: Travelling by boat has been one of the many fascinations to a lot of travelers and those on expedition in the past. Discovering new islands and exploring the depths of the sea and finding different cultures when one reached to a new land. Come June 2017, 2Go travel has been of service to a lot of businessmen, both local and foreign tourists and a lot more. But do you really have an idea on how much fare are you going to pay? Well, we will be glad to assist you on some important sea route destinations. 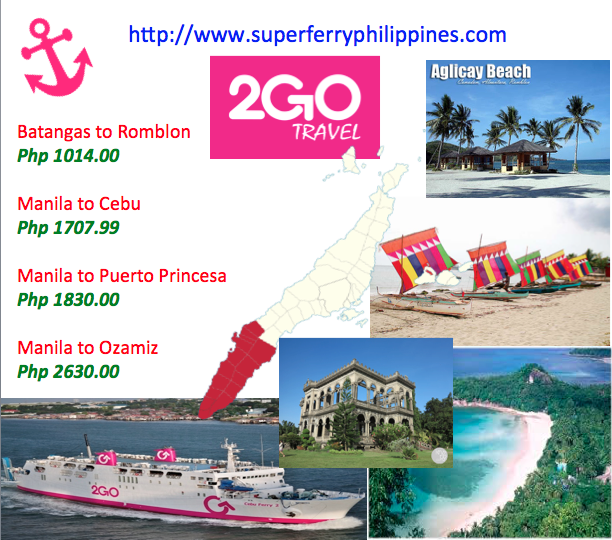 2go Travel Promo 2017-ABRILliant treat to all sea travel passengers! Summer is obviously felt in our tropical country, Philippines. And 2Go Travel has just launched this very affordable promo fares that's available only today. Of course, limited slots only and on a first-come, first-served basis. So what are you waiting for? Grab this opportunity now. It's a perfect time to discover the hidden beauty of our Archipelago. We have lots of tourist destinations that one can visit and explore. 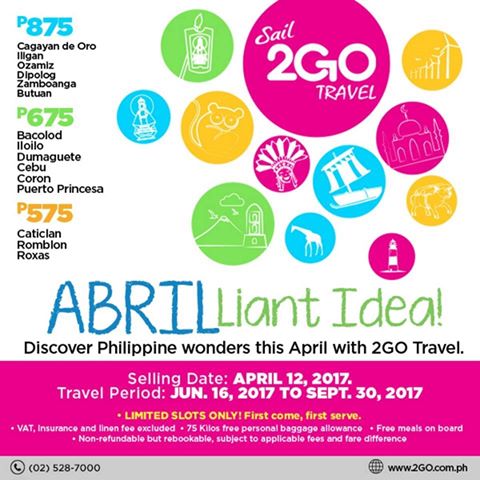