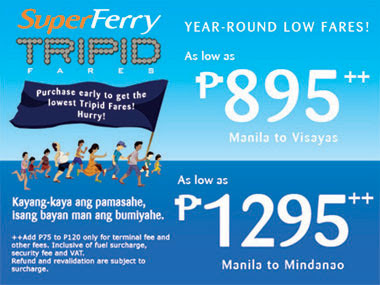 Get the best travel deals from SuperFerry!

For more information, call our Customer Interaction Center at (+63 2) 528 7000 or email us at info@SuperFerry.com.ph

PCG commandant Vice Admiral Wilfredo Tamayo said SuperFerry 12 managed to proceed to the port with a single engine running. The ferry was supposed to arrive 8 a.m.

Tamayo said two coast guard rescue vessels were alerted and instructed to monitor the ferry, which carried 647 passengers and 136 crew, as it entered Manila Bay. The agency's vessel traffic management services in Batangas and Corregidor island also kept an eye on the ferry.

The coast guard chief, in a text message, described the SuperFerry 12's problem as “piston seizure of the port main engine.”

He said his office has requested the Maritime Industry Authority to inspect and evaluate SuperFerry 12, after the engine is repaired, to determine whether the vessel could proceed with its next voyage safely.

Some passengers of the ferry texted several media firms, including the Philippine Daily Inquirer to relay their fears about the engine trouble as well as their dismay about the delay in their arrival.

“What if the other engine also broke down? The ship could have keeled over, with the waves so big. They [the shipping line operators] management should have made sure that the condition of their ship was okay,” said one passenger.

“It was scary because the waves were big. I wish our authorities would not permit such ships to sail out until it's assured that their engines are really fit because the ship may get into trouble and sink and many would die. I hope the authorities would act on this [incident],” another passenger said.

Meanwhile, Tamayo said the another passenger ship, MV Ocean Jet 3, got grounded off Tagbilaran City in Bohol around 7:45 am Wednesday.

Ocean Jet 3, which was carrying 75 passengers, was on its way to Cebu City when the accident happened.

Tamayo said a sister ship, MV Ocean Jet 5, together with a pilot boat manned by coast guard divers, towed the grounded vessel back to the Tagbilaran port.

Tamayo added that the captain of the ship was been advised to submit a report on the incident, while the local Marina office was requested to evaluate Ocean Jet 3's seaworthiness.